Upset bellies aren’t news around here, but what is news to us are two new all-natural pet diarrhea supplements from Vitality Science Holistic Pet Remedies.

We hadn’t heard of them until early summer while we were at Blog Paws. Since 2004 this small-family-owned company from New Mexico has been making a long list of all-natural dog and cat health supplements that get rave reviews from all over the planet.

Vitality Science has dog and cat diarrhea relief products we think every pet parent should have on hand. We’re not getting paid to recommend them either, it’s just that we’ve seen the positive effects of the natural ingredients within these products, especially bentonite clay, and want to make sure you know about it. Here goes:

GI Distress’ six ingredients, especially Yucca and Venus Fly Trap, have a pronounced effect on pathogens throughout the animal’s body. According to folk medicine, Yucca extracts have anti-arthritic and anti-inflammatory effects. The plant contains several physiologically active phytochemicals and is a rich source of steroida saponins. The ancient plant, Venus Fly Trap, extracts nitrogen from insects instead of the soil, its enzymes are highly specialized proteins. These protein enzymes are capable of digesting pathogenic protein structures, such as those causing chronic digestive disorders.” Read More About GI Distress Supplement for Cats and Dogs. 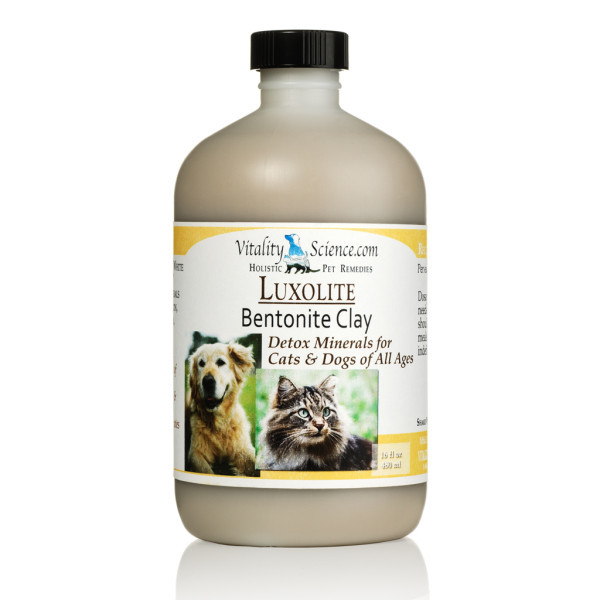 Bentonite Clay is the second most widely-used internal clay, Zeolite being the first, which gains most of its detoxifying abilities from its absorptivity. It works by the principals of cation exchange. Cations are positively charged atoms or molecules, which in the case of bentonite are often nutritional minerals that are released within the digestive tract for absorption in the body.

These nutritional cations are exchanged for other positively charged toxins within the body. They are then bound up in the molecular structure of the clay and excreted from the body. While bentonite clay absorbs a decent amount of water while passing through the gastrointestinal tract (helping to resolve diarrhea), it also absorbs many toxins.

Why it absorbs substances that tend to be harmful to the body while leaving nearly everything else in the GI tract alone is not well understood, but it has been repeatedly observed. Clay acts like a magnet. Positively charged toxins are attracted by the negatively charged surfaces of the clay mineral. The clay then holds the toxins in suspension until the body eliminates both.

Luxolite quickly restores minerals in the tissues where they are needed. Furthermore, minerals are the carriers of the electrical potential in the cells, which enable the hormones, vitamins, and enzymes to function properly.” Read More about Luxolite Clay Minerals for Cats and Dogs.

If you give these a try, let us know.